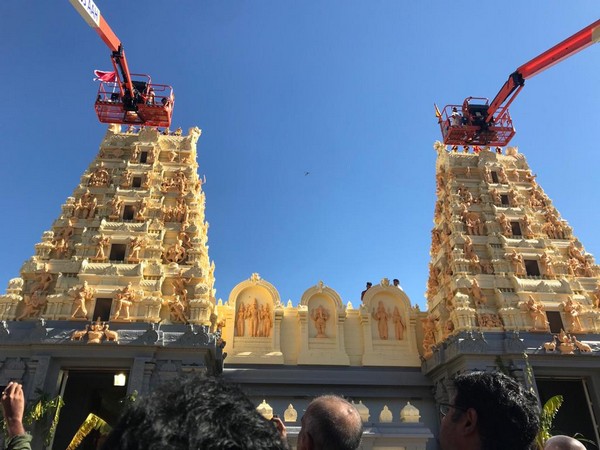 The Shri Shiva Vishnu Temple in Australia’s Carrum Downs has been vandalised with anti-Hindu graffiti. This has left Australia’s Indian-Australian community in shock, The Australia Today reported.
The act came to notice on Monday, January 16 after temple devotees came for ‘darshan’ amid the three-day long “Thai Pongal” festival which is being celebrated by Australia’s Tamil Hindu community.
Usha Senthilnathan a devotee of Shri Shiva Vishnu Temple told The Australia Today, “We are a Tamil minority group in Australia, a lot of us came as refugees to escape the religious persecution.”
She urged premier Dan Andrews and Victoria Police to take strict action against the goons who are trying to scare the Victorian Hindu community. On the evening of January 15 2023, Khalistan supporters tried to draw support for their referendum through a car rally in Melbourne. However, they failed miserably as less than two hundred people gathered out of an almost 60,000-strong Melbourne community, according to The Australia Today.
Hindu Council of Australia’s Victoria chapter President Makrand Bhagwat, as quoted by The Australia Today, said: “I can’t tell you how upset I am for witnessing a second Hindu Temple vandalised for Khalistan propaganda.”
Melbourne Hindu community member Sachin Mahate said: “If these Khalistan supporters have the courage they should go and draw graffiti on the Victorian Parliament building rather than target peaceful Hindu community’s religious places.”
Recently, BAPS Swaminarayan Temple in the Mill park area of Melbourne was allegedly vandalised by anti-India elements with anti-India slogans written on the walls of the temple, The Australia Today reported.
Patel, an onlooker who did not want to reveal his first name, shared how he witnessed the vandalised walls of the temple when he visited the site.
“When I reached the temple today morning all walls were coloured with graffiti of Khalistani hatred towards Hindus,” The Australia Today quoted Patel as saying.
He added, “I am angry, scared and dismayed by the blatant display of religious hatred towards the peaceful Hindu community by Khalistan supporters.”
Issuing a statement to The Australia Today, BAPS Swaminarayan Mandir stated that they are “deeply saddened and shocked by these acts of vandalism and hate.” It said that they have remained committed to “peaceful coexistence and dialogue to all faiths.” BAPS Swaminarayan Mandir further said that they have informed the authorities regarding the incident, as per The Australia Today report.
Meanwhile, Australian Prime Minister Anthony Albanese in a video message has extended “warmest wishes” to Pramukh Swami Maharaj ji and the BAPS organisation upon his 100th birth anniversary. The video message of Albanese has been shared by Australia’s High Commissioner to India, Barry O’Farrell. (ANI)