The Tripura government has formed a Lease Policy for government owned water bodies. This was announced by the state Fishery Minister Mevar Kumar Jamatia during a press conference in the

The Tripura government has formed a Lease Policy for government owned water bodies. This was announced by the state Fishery Minister Mevar Kumar Jamatia during a press conference in the secretariat on Monday.

Jamatia, while speaking to the media, said that the Lease Policy aims at bringing uniformity and optimum use of government owned water bodies for enhancement in fish production for generation of employment, decrease the dependence on import as well as for better contribution to food and nutritional security of the people of Tripura.

The minister further added that the policy has been adopted and implemented for the development of fisheries and aquaculture in a sustainable way through the adoption of scientific methods.

Meanwhile, the Fishery Minister informed that Tripura has been awarded by the Government of India on World Fisheries Day 2021 held at Bhubaneswar last month for the adoption of frontline and advanced fish culture technologies like bio flock and cage fish farming beside promotion of the construction of new water bodies and diversification of fish species.

Jamatia further highlighted that as per the 2019-20 census report, the state has a 23 percent shortage of fish production, which is fulfilled by importing from other Indian states and neighboring Bangladesh. However, he expressed that Tripura is emphasizing fish production through bio flock and cage culture and the gap between the demand and production shall be fulfilled in the next two to three years. 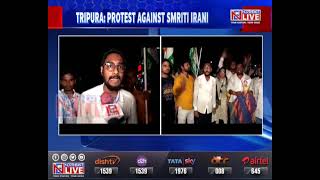