The counting of votes for the Rajya Sabha by-polls is underway in Tripura. The crucial bypolls began at 9 in the morning at the state assembly. 58 out of 59 legislators cast their votes.

Meanwhile, BJP national spokesperson and party’s Northeast in-charge Sambit Patra along with party’s Tripura Prabhari Mahesh Sharma were also at the assembly during the voting.

The BJP had fielded former Chief Minister Biplab Deb as the party’s candidate for the by-election.

The Left Front has named former finance minister and MLA Bhanulal Saha as its candidate for the Rajya Sabha by-poll. 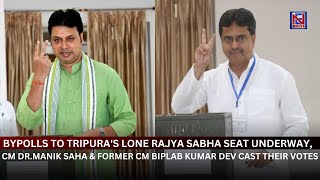 Noteworthy here is that the BJP has fielded former Chief Minister Biplab Deb as the party's candidate for the by-election.