The 2021 Hornbill Festival will witness the 11th edition of World War II Peace Rally on December 7, 2021 to promote peace and unity as well as to commemorate the

The 2021 Hornbill Festival will witness the 11th edition of World War II Peace Rally on December 7, 2021 to promote peace and unity as well as to commemorate the Battle of Kohima.

The state this year will be organising 22nd edition of the much awaited 10-day Hornbill Festival, the cultural extravaganza which will take place from December 1, 2021, until December 10, 2021 at the picturesque Naga Heritage village of Kisama.

During the festival a wreath-laying and flag-raising ceremony will be performed at the Commonwealth War Cemetery in Kohima to honour the dead soldiers.

The intended rally is one of the primary attractions in this long-running 10-day cultural festival, which strives to promote peace and harmony while also commemorating the Battle of Kohima.

About the battle of Kohima:

The Battle of Kohima in 1944 was a significant battle in World War II in the Naga Hills.

It is one such slice of history which was a decisive turning point in 1994 during the World War II.

The battle was fought in some of the world’s most difficult terrain, and it took a massive toll in terms of soldiers and resources, with more than 150,000 dying as a direct result of the battle.

The battle of Kohima took place in three stages from 4 April to 22 June 1944 around the town of Kohima.

The World War II Peace Rally is being organised every year as part of the Hornbill Festival by the Nagaland Adventure and Motor Sports Association (NAMSA).

Live Sikkim: 2 injured in fire at petrol depot in Gangtok 

The issue of illegal foreigners was discussed at length on the 2nd and last day of the 12th session of the 13 Nagaland Legislative Assembly yesterday. Nagaland Chief Minister Neiphiu Rio while cautioning Civil Bodies against authorising Inner Line Permit (ILP) certificates to illegal foreigners, emphasised the importance of fully enforcing the ILP in Dimapur and the […]

Naga Issue: NSCN-IM to continue talks with Centre for 3rd day in a row today 

After a crucial round of discussions with Government of India interlocutor AK Mishra yesterday, the National Socialist Council of Nagalim–Issak and Muivah (NSCN-IM) will continue its dialogue with the Centre in New Delhi for the third consecutive day today.  As per sources, yesterday’s meeting was extremely crucial and will be followed up by another round […]

The Department of School Education has issued a notification, directing heads of Government Schools to ensure that no teacher under their establishment engages in the practice. 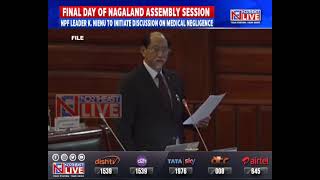 Today is the second and final day of the 12th session of the 13th Nagaland Legislative Assembly. As per inputs, MLA Imkong L. Imchen is expected to draw the House’s attention to matters of urgent public importance under Rule 54 pertaining to Foothill road construction. (Visited 4 times, 1 visits today)