The Hynniewtrep Achik National Movement (HANM) stormed the Meghalaya Secretariat Gate and threw boundary pillars laid by the Assam Government in front of it. The protesters who are against the 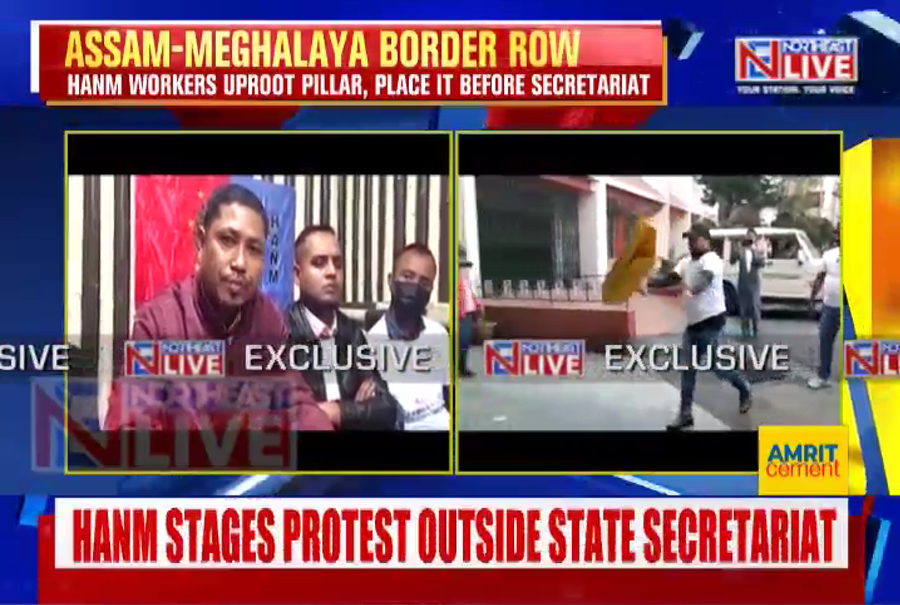 The Hynniewtrep Achik National Movement (HANM) stormed the Meghalaya Secretariat Gate and threw boundary pillars laid by the Assam Government in front of it.

The protesters who are against the alleged setting up of boundary pillars by the Assam government in villages under Hima Jirang reached in front of the Main Secretariat building, on Saturday afternoon.

The members of the pressure group threw boundary pillars outside the gate of the building and shouted slogans in front of the gate.

Following the incident the security forces who were deployed outside the gate, immediately locked the main gate.

HANM president Lamphrang Kharbani questioned as how did the boundary pillars of Assam landed up in Meghalaya territory?

Kharbani also questioned as to why has Assam erected boundary pillars in Hima Jirang village even as the two states have sent their Memorandum of Understanding on the border issue to the Ministry of Home Affairs.

The HANM president also targeted the Khasi Hills Autonomous District Council and stated that the KHADC have failed to protect the boundaries of the areas under its jurisdiction. Kharbani also said that KHADC should seek a clarification of the Syiem of Hima Jirang village.

Later while talking to the media, HANM member John Sangma alleged that the Assam government is vitiating the atmosphere at the inter-state border and called upon Meghalaya Chief Minister Conrad Sangma to make public the recommendations given by the regional committees on the border issue.

Meanwhile, the HANM also called upon the Assam government to look into the matter and ensure a peaceful resolution for the matter.

It may be mentioned that earlier authorities of the Hima Jirang village had alleged that Assam has set up boundary pillars in Umshru, Umshalani, Amring, Narling, Domupaham, Patharkhaïong villages while adding that Umshru does not even fall under the area of dispute between Assam and Meghalaya.