Wishes pour in for Manipur CM N. Biren Singh on his 62nd birthday

Extending birthday wish,PM Modi lauded him for working assiduously to transform the state 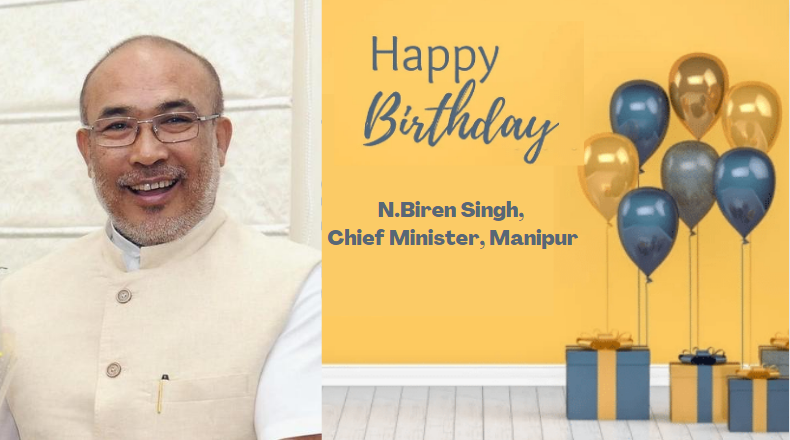 Wishes are pouring in from across the country, political leaders, friends, families and well-wishers for Manipur Chief Minister N. Biren Singh on his 62nd birthday today.

“Best wishes to the dynamic CM of Manipur, Shri N Biren Singh Ji on his birthday. He is working assiduously to transform the state. Praying for his long and healthy life,” PM Modi tweeted.

Union Home Minister Amit Shah also took to Twitter and wished the Chief Minister of Manipur and lauded him for his commitment towards the development of the state and the welfare of people.

“Birthday greetings to the Chief Minister of Manipur, Shri @NBirenSingh Ji. Your commitment towards the development of Manipur and the welfare of people is commendable. May God bless you with a long and healthy life,” the Home Minister wrote in his tweet.

Assam Chief Minister Himanta Biswa Sarma also wished him on his special day and prayed for the Chief Minister’s good health and a long life in the service of the people.

“Heartfelt wishes on your birthday Hon’ble CM Shri @NBirenSingh
ji. Your dedication to the development of Manipur is exemplary. I pray to Maa Kamakhya and Mahapurush Srimanta Sankardev to bless you with good health and a long life in the service of the people,” CM Sarma tweeted.

“Shri N Biren Singh Ji has been an extremely affable and generous person besides an able administrator. On his birthday, I pray to Lord Buddha to bless him with good health and long life. Happy birthday Adarniya
@NBirenSingh Ji,” CM Khandu tweeted.

Here are the wishes from other Chief Ministers of Northeast and political leaders:

A former football player who switched into journalism before entering politics, Singh joined the BJP in October 2016 and won the 2020 Assembly elections from his home Heingang constituency for a record-breaking fifth time.

He began his career as a football player and was hired by the Border Security Force (BSF) since he was an athlete. He then played for the BSF squad in domestic competitions.

He started “Naharolgi Thoudang,” a vernacular daily, in 1992 despite having no prior experience, and served as its editor until 2001 before entering politics in 2002.

Later, he joined Congress, held onto his position through 2007, and continued to serve as a minister till 2012.

He joined the BJP four years later, and in 2017, he was re-elected from the same assembly district and became the head of the party’s first administration since that year.