It was a tell all interview with Northeast Live, as the people's Chief Minister boarded the Rajdhani Express from Dibrugarh to travel to Guwahati last night at the end of 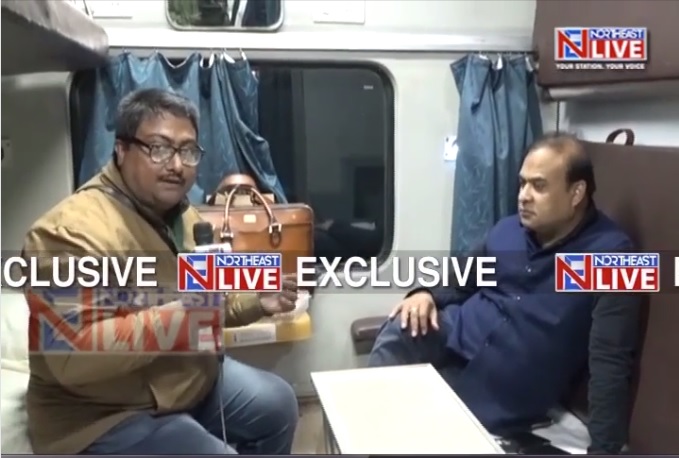 “Yes, Assam can do” is what Chief Minister Himanta Biswa Sarma is confident of in terms of topping the chart of the most developed state in the nation. It was a tell all interview with Northeast Live, as the people’s Chief Minister boarded the Rajdhani Express from Dibrugarh to travel to Guwahati last night at the end of a busy day in Tingkhong in Eastern Assam.

Speaking about his development push and inaugurating projects worth Rs 15,000 crore under the ‘Fortnight for Development’ initiative, Chief Minister Sarma said that his government has decided in the last 2 years to implement various capital intensive projects in the state. He said, “So, in last 1 and half year we tried, we tried for consultancy, we called for tender, we had to organize funds and this is the result of hard work that we have initiated in last one and half years. From Bongaigaon to Dibrugarh we have launched development works of approx Rs 15,000 crore in last 20 days.”

The Assam Chief Minister assured that the districts which have been left out in the first phase of the development initiative will be covered in the 2nd phase. The process will officially begin in February next. “We have schemes for almost all the districts, somewhere it is big; somewhere it is small, but we will keep on following till we reach our stated goals,” Sarma added.

Speaking in terms of his future aim, Himanta Biswa Sarma said that best efforts have been made since 2016 to take Assam on a path of development journey. Sarma believes that due to this, the BJP government in the state has been able to “create a buzz.” The Assam Chief Minsiter elaborating on the matter said, “As You know Assam is still not in the top bracket of the states. If we see or look at the present context of the country, we are somewhere between 24-26th position, whether it is a social indicator, development indicator, education, health etc. But since 2016, we are trying our best to take Assam into a different path or different development journey. And today we are successful in creating a budge, that “Yes, Assam can do”.

However, the ambitious Assam Chief Minister believes that he has miles to go with “lot of painful work” to be done. Sarma affirmed, “We will keep on working till Assam is placed in the top ranks of the country.”
Himanta Biswa Sarma also spoke on the upcoming elections in the 3 states of Meghalaya, Nagaland and Tripura since he also happens to be the NEDA convenor.

Sarma who has been credited for playing the pivotal role of consolidating the Saffron party’s position in the Northeast, said this time he has no direct role in the upcoming elections. Himanta Biswa Sarma attributed this to the fact that he has now become the Chief Minister of a state.

The NEDA convenor added that the party leadership of the 3 states as well as designated Prabhaaris are relentlessly working to fight the elections by harping on the development agenda. A confident Himanta Biswa Sarma said, “Everybody is working hard, so that as BJP we can retain Tripura, as BJP we can retain and improve the number of seats in Nagaland and as BJP we create certain significant marks in the state of Meghalaya. To the best of My knowledge things are going on properly. Recently, PM Modi Ji has come, he has addressed a large meeting in Agartala, he also addressed people in Meghalaya from the platform of NEC and by all indication I am 100% confident that BJP will improve it’s position in the elections further.”

On the other hand, the Assam Chief Minister also spoke on the inter-state boundary issues with Meghalaya, Arunachal Pradesh, Mizoram and Nagaland.

Himanta Biswa Sarma hopes that barring 1 or 2 points, by and large his government will be able to resolve the boundary conflict with Meghalaya.

Sarma said that the boundary issue with Nagaland is in the Supreme Court. He added, “So I think we will wait for the judicial verdict on Nagaland but till then we are maintaining status quo, neutral forces are there and there are also efforts to create a sense of confidence among the citizens of the 2 states.”

However, the Assam Chief Minister said that the boundary issue with Mizoram is a bit complicated and feels that confidence building is required on both the sides. Himanta Biswa Sarma said it is impossible to enter a discussion till a level of confidence is created among the citizens of both the states.

When asked if he has plans to shift to national politics, the People’s Chief Minister said, “You all know I have just become the Chief Minister of Assam. So in our party our roles are defined by the party leadership. It is not for an individual to think about the position. So let me do complete justice to the present responsibility which the party has given to me with lot of hope. So I think I should concentrate on the job at hand.”

Last but not the least, Chief Minister Himanta Biswa Sarma also expressed his views on the Naga issue and his role. Sarma said that it is a very complex and complicated issue, which should not be discussed in the media. He added, “I dont think one should discuss this issue in the media because this will not help, this will only result in disservice.”