Mekhela Chador is undoubtedly one of the most popular attires of the Northeast that has won the hearts of all fashionistas for the past several years. The beauty of this traditional 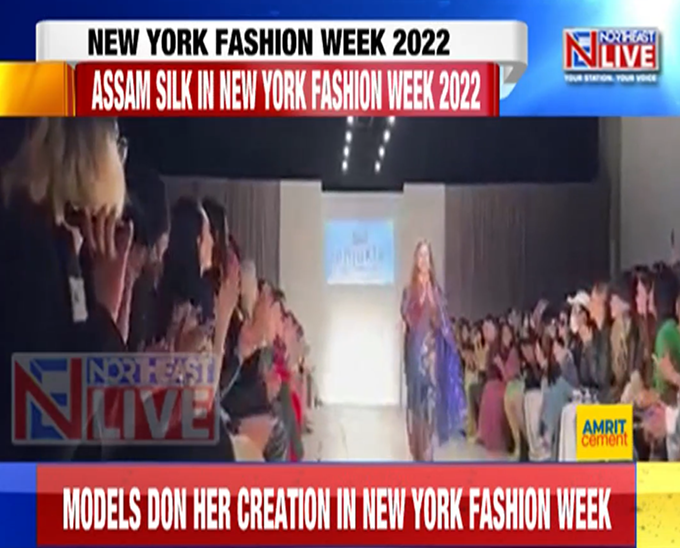 Mekhela Chador is undoubtedly one of the most popular attires of the Northeast that has won the hearts of all fashionistas for the past several years.

The beauty of this traditional Assamese attire has not remained restricted to the Northeast per se – it has proudly transcended borders, both nationally and globally.

And one person who has contributed enormously to taking the elegance of Mekhela Chador outside the region is Assam’s very own Sanjukta Dutta, the ace celebrity fashion designer whose latest collection ‘Aalphool’ has made the region proud yet again at the latest edition of New York Fashion Week 2022.

With exquisite designs, Sanjukta’s Aalphool collection is an eclectic mix of modern and contemporary designs, that beautifully does justice to the golden muga and mulberry silk.

Speaking about the occasion, Sanjukta said that it was a dream come true and a privilege for her and the team to see the Assam Handloom being recognised at the New York Fashion Week, which is one of the world’s biggest fashion platforms for designers.

She was hopeful that the closets in the United States will soon find perfect Assamese couture designed by her.

Several other ex-pats of Indian Origin based in New York were also present in the show.

Consul General of India Randhir Jaiswal congratulated Sanjuka on her latest endeavour, stating that her designs rightfully display the rich colour and culture of Assam.

Sanjukta Dutta combines the traditions and prints of various cultures into a one-of-a-kind customised garment, with the Assamese silk ‘mekhela chador‘ serving as the base in most cases.

Bollywood actors Priyanka Chopra, Bipasha Basu, Hema Malini, Zareen Khan, Preity Zinta, and Tabu, among others, have worn her designs in the past.

She has also received the prestigious Dada Saheb Phalke Excellence Awards 2018 in the category of “Best fashion designer” of the year last year.