Assam Cabinet Minister Pijush Hazarika visited the family members of deceased Nipen Singh last night.  During the visit, Minister Hazarika and the accompanying MLAs had talks with family member of 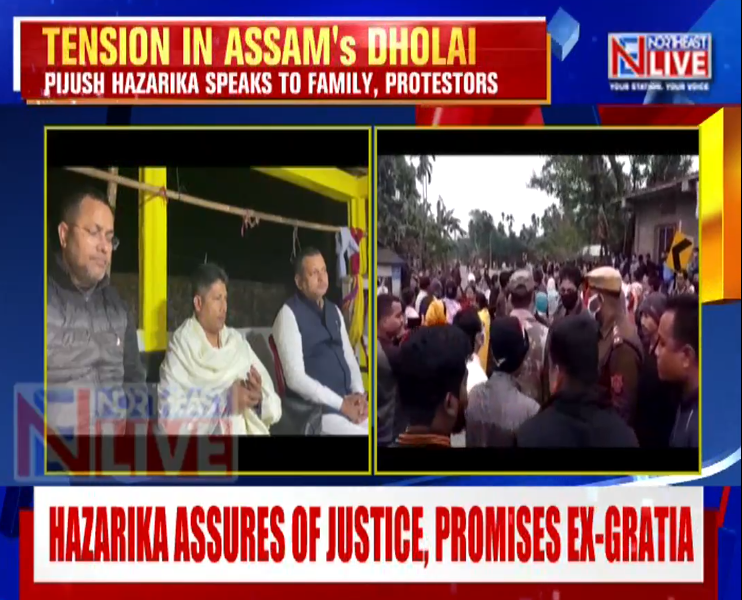 During the visit, Minister Hazarika and the accompanying MLAs had talks with family member of the deceased as well as the protesters. Cachar SP Ramandeep Kaur was also present in the meeting.

Nipen died in police custody in Mizoram and was held for the murder of trcuk driver Praveen Singh on January 31. The news of his death reached his family members who cried foul play at the turn of development.

It may be mentioned that tension prevailed at Dholai in Assam near the Mizoram border after locals blocked the highway and staged a protest on Thursday.

Angry locals and family members of Nipen Singh blocked the road and raised slogans after his mortal remains reached from Mizoram.

Locals blocked the highway to Mizoram at Ramprasadpur while demanding that police and authorities in Assam should undertake a proper probe into the matter.

The irate locals even stopped some vehicles and pelted stones at them while trying to stop them from going to Mizoram.

Earlier, post mortem was conducted at the Silchar Medical College & Hospital following which it was brought to Dholai which however heated up the situation among the locals alleging it to be a murder in police custody in Mizoram.

Meanwhile, heavy security has been deployed in the area to prevent any untoward incident from happening.

Protestors who blocked the road said that they will not accept the body of Nipen Singh until police and authorities in Assam take some strong steps in this regard.

It is to be noted that Nipen was the handyman who was accused of having murdered truck driver Praveen Singh and had been detained in Mizoram by the police.