9 Army boats along with 4 NDRF, 7 SDRF, and 546 private boats have been pressed into service for the relief and rescue operations.

Massive relief and rescue operations are being carried out in Assam’s Hojai district which has been the worst affected by the floods.

Over 4000 people of the total 7000 marooned by floods have been rescued so far as disaster management teams along with the Army carry out massive rescue operations in the district.

Speaking exclusively to Northeast Live Editor in Chief Wasbir Hussain, Hojai Deputy Commissioner Anupam Choudhury informed that 9 Army boats along with 4 NDRF, 7 SDRF, and 546 private boats have been pressed into service for the relief and rescue operations.

While over 80 thousand people have been affected by the deluge in the district, rescue operation teams have been able to bring to safety over 4000 of the total 7000 people marooned. As many as 51 relief camps have also been set up in the district.

The Hojai DC also informed that trains will be used to carry relief for affected people in the district. Trains are the only means now, to reach certain areas, the Deputy Commissioner informed. 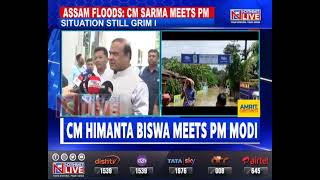 CM Himanta Biswa Sarma said that MLA’s are welcome in the state, adding that he has nothing to do with the politics of Maharashtra

Bhonsale, who is being described as an emissary sent by Uddhav Thackeray, was arrested by the police a short while back.