In a landmark move, Assam and Meghalaya signed a historic border agreement resolving the 50 year old inter-state border dispute in as many as 6 areas of difference between the

In a landmark move, Assam and Meghalaya signed a historic border agreement resolving the 50 year old inter-state border dispute in as many as 6 areas of difference between the states.

Union Home Minister Amit Shah also called it a historic day and credited Prime Minister Narendra Modi for focussing on the Northeast. The Home Minister added that with the signing of the agreement over 50% of the border dispute between the states has been resolved.

The pact resolves the protracted dispute in 6 of the 12 places along the 884.9 km border between the two states. The six areas of difference were among the less complicated areas and were hence taken up for resolution in the first phase. There are 36 villages in the 6 areas covering an area of 36.79 sq km. Among the 6 areas of difference for which the agreement was signed today are Hahim, Gizang, Tarabari, Boklapara, Khanapara-Pillingkata and Ratacherra.

Briefing the media after the signing of the agreement, Assam CM Himanta Biswa Sarma said the deal will usher in a spirit of unity between Northeast states. Sarma also thanked the Centre and his Meghalaya counterpart for the historic deal.

Meghalaya Chief Minister Conrad Sangma also termed the agreement as historic, something which the previous governments could not achieve.

Nagaland Government orders closure of all check-gates in state

Mukul Sangma stated that as a political party it is not binding that every sitting MLAs should be given party tickets.

The government has sought a comprehensive report from all the Sub-Divisional School Education Officers on the schools building. 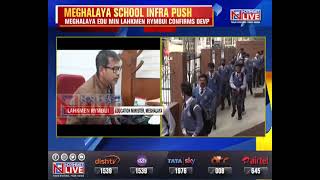 The Hynniewtrep Youth Council today backed the demands raised from different quarters for reviewing the Memorandum of Understanding signed between the Assam and Meghalaya government pertaining to the inter-state border issue. .Briefing newspersons, HYC president Robert June Kharjahrin also cited that the government must consider this since such demands have come from parties which are […]

In an unfortunate incident at Ri Bhoi District in Meghalaya today, a huge uprooted tree fell on an auto rickshaw at Panitola in Byrnihat.A minor who was on board the autorickshaw lost his life in this incident while two others sustained injuries.As per reports, the incident occurred while the auto-rickshaw was on its way to […]