The Kuri Dajum Olung Welfare Society (KDOWS), a conglomeration of several clans of the Adi tribe wherein Taki clan is also a part, has called for completion of the investigation into the murder case of Tamik Taki, inspector, tax & excise.

The umbrella organization has stated that they would resort to democratic agitation if their demand is not fulfilled.

Noteworthy here is that 6 days of the ultimatum time period have already gone by. The KDOWS had submitted a representation to the SP Upper Siang district on July 27 and had called upon the police to complete the investigation within the given time period.

Talking to Northeast Live, Dr Kabang Lego, president of KDOWS said that they would resort to agitation if the investigation is not completed within the given time period.

Tamik Taki, the inspector of the tax & excise department had gone missing from Itanagar on April 22 this year. His dead body was found in the Siang river near Jido village in Tuting circle of the Upper Siang district.

Several local groups including the Adi Bani Kebang have termed it a cold-blooded murder and sought justice for the victim.

The case also saw massive protests across Arunachal Pradesh with a large number of people seeking justice for the murdered Tamik Taki.

Live Tickets may not be issued to MLAs who joins BJP: Ernest Mawrie 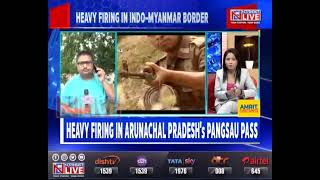 Heavy firing is underway between militant outfits and the Army along the Indo-Myanmar border in Pangsau pass area in Arunachal Pradesh since 4 am today. Watch to know more. (Visited 26 times, 1 visits today)

Located just about 15 kilometers away from the Mcmahon line, the Kaho Village is inhabited by 17 families in total.

The confirmation about Ali’s arrest was given by Koloriang police station Officer in Charge Gejum Basar.

Exclusive: Counter-insurgency op in Arunachal Pradesh – An inside look