Even as the Naga peace talks between the government and the NSCN-IM gained a new momentum with the appointment of new interlocutor Akshay Kumar Misra, the outfit has issued a 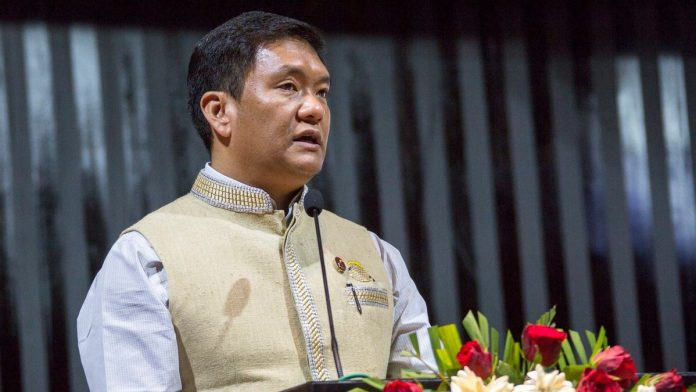 Even as the Naga peace talks between the government and the NSCN-IM gained a new momentum with the appointment of new interlocutor Akshay Kumar Misra, the outfit has issued a sensational statement dictating the legislators of Tirap, Changlang and Longding districts to withdraw their support to Chief Minister Pema Khandu and Deputy Chief Minister Chowna Mein.

In the statement, the NSCN-IM has accused Khandu and Chowna Mein of acting against the Naga people’s interests.

Further, the outfit mentioned that the MLAs who fail to uphold the right of the Nagas in Arunachal Pradesh” would be considered quote unquote “anti-Naga.”

It may be mentioned here that the TCL region has 11 legislators, including three cabinet ministers.

Notably, the statement from the NSCN (IM) is reportedly a reaction to the circular issued by Longding Deputy Commissioner Bani Lego, informing the public about the Constitution (Scheduled Tribes) Order (Amendment) Bill, 2021, deleting the term ‘Any other Naga tribe’.

The circular issued by the by the DC states that, henceforth, ST certificates and permanent resident certificates will be issued in the name of the Wancho tribe of the district, in lieu of ‘Any other Naga tribe’.

The central government passed the bill in August, amending the constitutional list of the STs, as recommended by the Arunachal Pradesh government, and added the indigenous tribe names of Monpa, Sajolang, Sartang, Tai Khamti, Mishmi-Kaman, Idu (Mishmi), Taraon (Digaru Mishmi), Nocte, Tangsa, Tutsa and Wancho. It deleted the words ‘Any other Naga tribe’.

The NSCN (IM) stated that the amendment, erasing the word ‘Naga’, “has blatantly insulted and humiliated the sentiment and rights of the Nagas of Tirap, Changlang and Long-ding districts in particular and the Nagas in general, which is unacceptable.”