Indian-American film, ‘The Illegal’ has been shortlisted at the Oscars 2021 for the Best Picture category.

Directed by Danish Renzu, The Illegal which was released in 2019 is about a student from India who he leaves his home, country and family behind to pursue the American Dream after being accepted to study in a prestigious university in the US.

Due to an unfortunate turn of events, he is forced to work in a restaurant for his survival. The film uncovers the challenges faced by him and how he meets them.

The film is directed by Kashmir-born Renzu and produced by California born Tara Tucker, who had work on projects including Glee, The Simpsons, Family Guy and Avatar.

“The Illegal is a film on immigration, country-city contrasts and youthful dreams of the future told through an Indian immigrant Hassan who comes to America to become a filmmaker. It follows Hassan, who moves to Los Angeles to attend college and pursue his filmmaking dreams. Because of circumstances beyond his control, he is forced to drop out of school and get a job, becoming an undocumented worker,” says Renzu.

“I wanted to tell this story as a way for the audience to put themselves in the characters’ shoes and to recognize that illegal immigrants each have an individual story that we can relate to and showcase amusing misconceptions and common stereotypes. Behind the playful humour is a story rooted in the immigrant journey, the painful truths that can reveal themselves on the way and the motivations that drive it despite its difficulties is the crux of the story,” says the director. 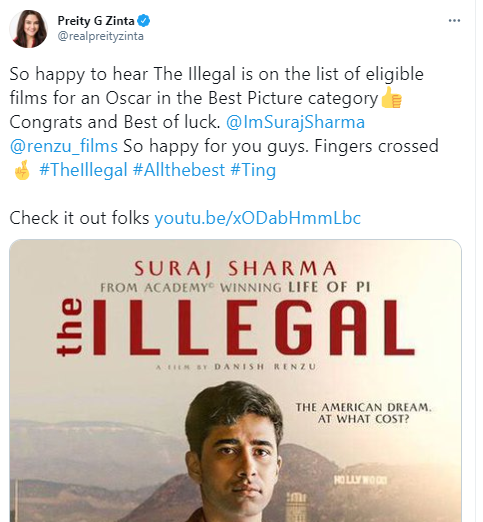 Meanwhile, Preity Zinta took to social media to congratulate the team and wrote on Instagram: “So happy to hear The Illegal is on the list of eligible films for an Oscar in the Best Picture category. Congrats and Best of luck. Suraj Sharma and Renzu Films–So happy for you guys. Fingers crossed #TheIllegal #Allthebest #Ting”.

The 93rd Oscars will be held on April 25 and will be televised live in more than 225 countries and territories worldwide. (ANI)