The wreath-laying ceremony of Indian Army soldiers who lost their lives in Galwan valley face-off was performed at Army Hospital in Leh on Wednesday. Chopper activity was also seen in the area today. 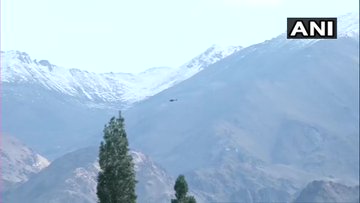 The violent face-off happened on late evening and night of June 15 in Ladakh’s Galwan valley as a result of an attempt by the Chinese troops to “unilaterally change” the status quo during de-escalation in Eastern Ladakh and the situation could have been avoided if the agreement at the higher level been scrupulously followed by the Chinese side, India said on Tuesday.

The Army confirmed that 20 personnel, including a Colonel rank officer, were killed in the face-off. This figure includes 17 who were critically injured at the stand-off location and exposed to sub-zero temperatures in the high altitude terrain.

Indian intercepts revealed that the Chinese side suffered 43 casualties, including dead and seriously injured, in the violent face-off. The commanding officer of the Chinese Unit is among those killed, sources confirmed to ANI.

Indian and Chinese troops have disengaged at the Galwan area in Ladakh where they had earlier clashed on the night of June 15 and 16, Indian Army said. (ANI)

20.29 lakh healthcare workers vaccinated against COVID-19 across India so far

20.29 lakh healthcare workers vaccinated against COVID-19 across India so far